This game was submitted for the 1st Game Maker's Toolkit Game Jam!

Well, sadly, no one tends to look at the credits. But if you really want to, feel free to shoot something!

But Command: prompt_ is also a shooter that forces the player to manage their actions: if you shift the game to an easier mode by shooting enemies that favour you, your score multiplier will decrease. If you want to increase it again, you'll have to shoot an enemy with an effect that’s bad for you - like, say, reducing your own movement speed.

Balance between difficulty and multipliers to achieve the best score you can. And if, for some reason, you want to quit this awesome game, you know what to do… just shoot something!

Adherence to the Jam's Theme: This game uses dual-purpose design in a number of different ways. The first is that every action that, in most games, is done through menus and pause screens (like quitting, muting sound, restarting the game and others), is done here by playing the game itself, meaning the game screen offers both the purpose of the meta-game and the game itself.

Another way Command: prompt_ uses the theme is the fact that most enemies you kill wield multiple effects on the game: regaining a life point forces the player to lose part of their score, making yourself faster reduces your score multiplier and the opposite is true for your enemies, muting the game increases the multiplier, etc... The player has to balance these effects constantly in order to achieve the highest score possible. It's an examination of what makes a game fun and of an attempt of making a single mechanic, instead of dual or multi-purpose, nearly OMNI-purpose.

For added self-imposed difficulty, try not moving! - One more purpose given to shooting things!

This is... a really, REALLY clever game! Always found a new way to surprise me. Sure, it's not very challenging, and I really didn't find a need to choose what I shot... until I hit the one that sent me back to the main menu. Really well done!

Thanks for the feedback! We had trouble hitting that sweetspot between difficulty and fairness, and we believe that's the one aspect we'd focus the most if we had more time. :p Glad you liked it <3 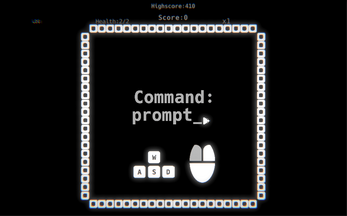 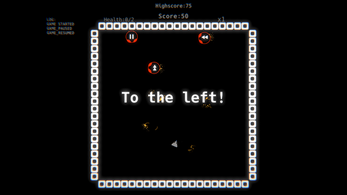 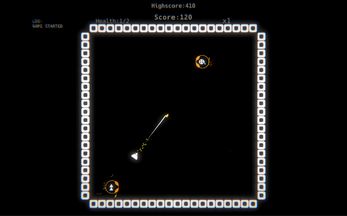 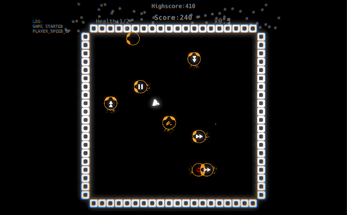 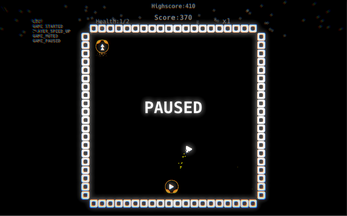